Exploring the first strand of the 4th Prince meme – The Fool

When I was in middle school, I was taught that Don Quixote, a creation of Cervantes, was an absurd, delusional, sad old man who would not embrace reality, its banality and its overwhelming ordinariness that corrodes the soul. I remember the sheer disdain and pity, I felt for this man those days, who had a knack of making a fool of himself in a series of adventures.

It took years, nay decades, to understand the complexity of this character, to identify with him, and to finally love him to bits. As I turn fifty in a couple of months, I have never felt more lost and more found at the same time. Never before have I felt so paranoid and helpless as I switch on television or read the press – the world that I believed in is crumbling. With all this churning, I find myself embarking on a series of new adventures that beckon – for example I am trying to suss machine learning, and how it would impact the future. I am investing huge energies towards a PhD, exploring how organizations and work would change. And I have shut many a doors behind me – of cozy and comfortable spaces that would have perhaps insulated me from my angst and the dreariness of my existence.

I picked up Quichotte by Salman Rushdie a few week ago, a serendipitous act given my state of mind, and the book, I daresay, is mind-blowing. Perhaps this is Rushdie’s best work thus far and I am very evoked to write about the book. I guess this blog is as much about Quichotte as about me.

In this blog, I would also introduce the 4th prince archetype as discerned by Prof Pulin Garg and his immortal work on the Four Princes – this would be the first of three on the 4th prince – a complex role-identity that includes memes of the Trickster, the Magician and the Seeker. For those of my readers who have been following on my deconstruction of Pulin’s work – I would recommend two other blogs on this website that are dedicated to the 2nd and 3rd Prince archetypes.

Quichotte is Rushdie’s ode to Cervantes and a lot more…

Set in the contemporary English-speaking nations of USA and UK, the book chronicles the world of two old men who mirror each other, as each seeks to understand what it means to be ‘the westoxicated alienated Indian’ (Rushdie’s words) in a foreign land, with no real sense of belonging and connection to any land or commune.

One of the protagonist has watched so much of TV in lonely motels and hotels across USA over the last two decades, as a deadbeat pharmaceutical salesman, that his ability to discern and distinguish reality has finally frayed and crumbled. He falls in in love with a talk-show hostess, second to Oprah, and decides to rescue her from evil TV Show producers, and live the fairy tale ending with her. In this quest, he creates a son that he never had, for he appears to have lived alone all these years, and converses with the son as he drives his way up to NY. He calls his son – Sancho.

And in this journey, he combats hate, prejudice, numbness, fear, paranoia, dystopian shades of world collapsing, self-hate and self-sabotage … and fights these dragons off with ‘love’. Rushdie is brilliant with his painting of US society – and the backdrop is studded and imbued with side plots of the opioid crises, of Trump politics, of colonization, of internet plots, of secret wars, of venom and racism, of hate towards Islam, of ambitious soulless corporate executives, of greed, of rape and violation, of environmental damage and plastic… Rushdie is not shy to bring in the Indian identity of his protagonists – there are times when he brings Mumbai of 1960s alive, but more importantly, he works with what it means to be Indian in USA or UK.

The book is mind-blowing because as I read it, my grip over what is real and unreal in the initial chapters gets challenged as a reader’s experience. Half way through the book, I begin asking myself of how I straddle an interesting polarity that Rushdie poses – that of ‘paranoia’ (that there is much more to reality than what I can make sense of) on one side and ‘dystopia’ on the other (that the world is crumbling away and there is nothing that I can do about it).

It is this continuum between the two poles of paranoia and absurdity of living, that Rushdie pushes you as a reader as you work with and journey along the two male characters who seek … without really knowing what each seeks. The book is seductive, it is at times really funny, and most of the time it is heart wrenching for it evoked me to look at my own existential aloneness and how I cope with it.

Without wishing to reveal more of the book, what makes Quichotte really a great tale is that Rushdie does a lot more than his usual magic of words, inventive phrases, insightful ironies, subtle sarcasms, cynical commentaries – Rushdie talks about Love and quite unabashedly too.

As the world crumbles in Quichotte, Rushdie reminds us that perhaps it is just Love, love for the Other (and thus redemption for self) that really matters as we cope with this frightening world. It may sound cliched to you, but the two narratives take you through an intense rollercoaster of emotions, across the seven valleys that test the protagonist and the reader, and leave you with a clear realization that nothing else matters as one encounters emptiness, awaiting sure death as much as Love.

Quichotte, thus becomes a must read to really understand the power of the archetypal Fool as well as to construct something meaningful and substantive in a world that is transforming before our very eyes. Quichotte perhaps prepares the reader for working with both fear and entropy, as the world changes around us.

Embracing the Fool: Encountering the Fourth Prince within

I have always found the role identities of the Warrior and the Healer, much easier to explore and explain of the four identities that Pulin refers to. For example, one can easily map the Healer with the energies of the Lover, the Saint, the Martyr, the Friend, the Virgin etc. within and argue about the complexity within the archetype. The same can be said of the Warrior – with energies of the Samurai, the Mercenary, the Butcher, the Coward, the Assassin, the Violator etc.

But understanding the 4th Prince would mean embracing the Fool within first, before one looks at the other strains – that of the Trickster, the Magician, the Joker and the Seeker. Don Quixote or Quichotte is the archetypal fool – romantic, creative, delusional and paranoid at the same time. 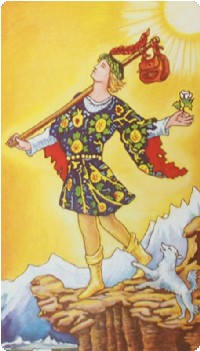 The Fool is on the edge of the world – looking at the dreariness within the world of systems, of data points, of banal contracts, of instrumental relationships, of collusive partnerships, of abuse and violence, of exploitation and corruption et al. The worldview almost pushes the Fool to create a new world within – highly romantic, unhinged and yet intense, unreal and yet very real.

The Fool is willing to leap off the ledge of rationality and prudence into the very abyss of escape and romanticism. Often this archetype may tempt you towards self-sabotage, as you gamble for odds – odds to encounter the sheer magic in your world. There is a romance that beckons the energies of self-hate and self-deprecation, with a promise to transform – a sense of delusion that holds one a captive. Quichotte offers the magic key to the Fool captive to his or her delusions – that of gambling on love.

The Fool allows one to strip away the masks of grandeur, the veils of wisdom, the shields that keep the wounds alive, the rationality of sense making – this archetype can be very powerful indeed – bringing in creativity and play, provided one is able to release self from the prison of narcissism.

It is often said that a Man’s deepest fear is that of being laughed at (especially by women), and that this fear makes Man incapable of touching the Fool within. The very thought of being a Fool creates visions of derisive laughter, of disdain and of exclusion – and these are quite frightening.

In my consulting work, The Fool and the Fourth Prince archetypes are not easily owned up by people that I work with. Most corporate executives and business leaders seem to quickly shrug away any attribution to the Fool – as if this part of their identity processes is a taboo, an insult to their years of achievement and management.

However, the Fool has an overwhelming presence today

Take for example, Boris Johnson, who uses this archetype to cover up his inane struggles with power, meaningfulness and stability. Boris has been quite creative (and of course extremely manipulative), when it comes to his image or his persona. Despite utter trash being cited over Brexit, this archetype seems to attract the attention of many a voters that struggle with despair and meaninglessness. Boris is the Trickster and the Fool – this is no state secret and yet everyone who is ‘bored’ with the state of affairs when it comes to Brexit, is willing to collude with him – just for a laugh maybe.

The film, the Joker, (and I am yet to see it), seems to be pushing this archetype’s associated despair and unexpressed rage, towards cruel violence and narcissism. It has caught the fancy of audiences the world over.

Thus, my hypothesis is that it is critical that the Fool and the Fourth Prince is worked within – there has to be an inner dialogue with the Fool within, lest we get seduced by the Fool outside.

What makes Quichotte a powerful tale is how Rushdie offers a different lens to working with the Fool and that of Love.

2 thoughts on “Quichotte, Despair, Romanticism, and Wellbeing: The Fool Archetype”