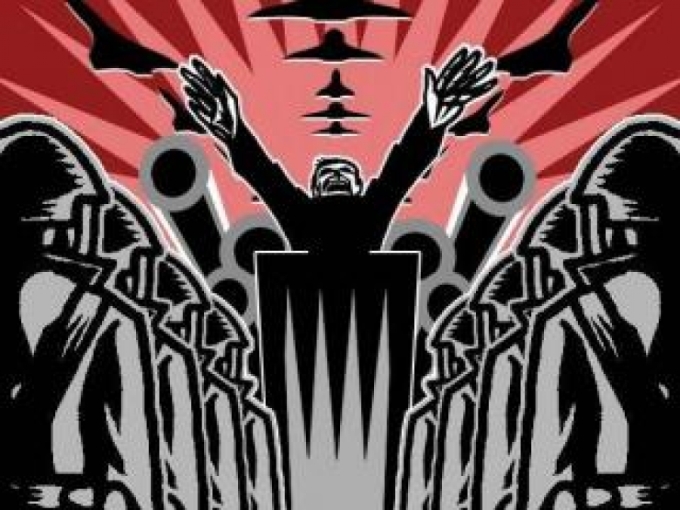 It was in a recent conversation with a very dear friend – Antoine Legrand, who is a key member of IFSI – Paris and a co-traveller in many ways, and where we were lamenting our collective verdict that ‘masculinity’ today is being possessed and monopolized by bullies and rogues; such as Donald Trump for example, when the theme and processes of Authoritarianism first occurred to me.

Serendipitously, I came across research by Marc Hetherington and Jonathan Weiler – in their book – Authoritarianism and Polarization in American Politics – where they argue that a large number of American voters across demographic divides – education, age, religion, and income, are largely ‘authoritarians’ and would seek and support leaders such as Trump.

I believe that authoritarianism cannot be just labeled as an American trend, and out there, for it envelops and impacts us all in ways more than we are aware of.

For those of you who are not very familiar with the term – authoritarianism – the enquiry began in the realm of political science and psychology in the 1940s by agonizing over the phenomena: “Of people, in very large numbers and quite rapidly, acquiring extreme political views, along with a paranoia of minorities, and a deep desire for a strongman leader – thus creating a push for extreme policies and in seeking forceful, decisive, and action oriented leaders.” Authoritarianism was not about Hitler or Mussolini but about the social context that created them in the first place.

Authoritarians seem to prefer and prioritize ‘a social order’ and ‘hierarchies’, which bring a sense of control to the perceived chaotic world. Any and every challenge to this ‘order’ — including diversity, plurality, influx of outsiders, the breakdown of the old order et al — are experienced as personally threatening. These challenges are seen as an attack on the status quo order, which authoritarians equate with basic security and safety. Thus Authoritarians are supportive of punitive leaders who can protect them from such risks.

If you look at Indian political history and in post independence era, Indira Gandhi and her son Sanjay Gandhi were amongst the first such strong, action oriented and punitive leaders that was supported by the authoritarians within the country. The rise of Narendra Modi as opposed to others in BJP, is another sign of authoritarianism prevalent in the masses. 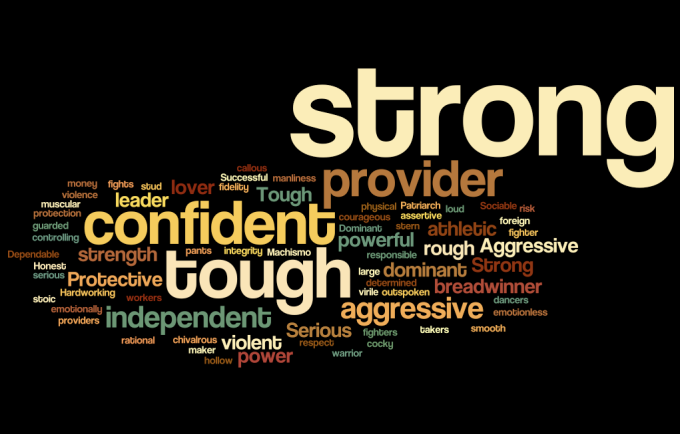 On the other hand, by masculinity, I am referring to traits and behaviors that include courage, self reliance, independence, risk taking, and assertiveness (power); In this note, masculinity also includes restricted emotionality, pursuit of achievement, need for strength and aggression, homophobia, and a certain notion of precariousness that masculinity is not inborn but that masculinity has to be achieved – through rituals and by overcoming obstacles and battles.

Many have written on Masculinity being in ‘a state of crisis’ in the post-industrial societies, and that masculinity has outlived its usefulness. For example in Japan in 2008, the word ‘herbivore men’ became very popular and was applied to men who (a) have a gentle nature, (b) not bound by notions of manliness, (c) are not aggressive when it comes to romance, (d) view and believe that women are equals, and (e) who hate emotional pain. The herbivore men, of course, were severely criticized by men who love masculinity.

In this blog, I am attempting to link a ‘declining masculinity’ (for both men and women) with ‘rising authoritarianism’ in the systems that we belong to – I don’t see this link as a simple causality to one being impacted by other, but rather believe that masculinity has been corroded in our socialization processes in all the systems including families and organizations.

I am steering clear of national and international politics – while these realms offer spicier evidence of authoritarianism in the choice of leadership being spoken of (Trump, Putin, Modi et al), the real danger of rising authoritarianism is more imminent and contiguous – it is the organizations that govern us on a daily basis, through the mundane and ordinary processes of markets, of capitalism, of local governance etc.

For those of you follow the EUM framework and its text, authoritarianism gets reflected in SC and SI scores of high UBP, low USD, high URB, low UMI, and low UDS and OP scores of high USD. The EUM research over the years finds this kind of a profile fairly common and prevalent in the Indian middle class of professionals who become the disenfranchised stakeholders in their own organizations.

Dare one say that the Indian middle class has low masculinity but high authoritarianism giving rise to a certain quality of impotence and victimization that goes hand in hand with the kind of powerful leaders we subscribe to – a vicious circle that is difficult to emerge out of.

Lets begin with socialization as a process in our systems …

The HR professional community has been using the term – ‘Onboarding’ – for several years, referring to a mechanism of complex processes that allow the new employee to acquire necessary skills, knowledge, expertise, and desired behaviors to become an insider.

Onboarding as a function or as an OD process is getting a fair share of attention today for several reasons – firms and businesses that recruit outstanding talent from other systems are discovering that the imagined impact that a newcomer is likely to bring in or usher far exceeds what happens in reality. New inductees speak of feeling handicapped and constrained by extant systems and cultures, and how they are unable to experience masculinity in the form of self-reliance, aggression, or even risk taking.

IT, ITES and BPOs in India for example invest substantial energy and significant resources into onboarding processes. Organizations such as TCS, Genpact or Accenture recruit in thousands every year from a pool of professionals that is diverse in every respect.

Yet several of these recruits across organizations, and over the years, bemoan and lament their lack of authority and influence, their own powerlessness and lack of assertion, their dependency on safety and belonging that leads them to be collusive and spineless, and their anxieties in taking risks. It is almost as if on-boarding and subsequent organizational processes in companies that engage with high technology, castrate the larger majority of its professionals of any form of masculinity that is undesirable by the system.

On the other hand, senior managers of most firms are expected to display agility, results orientation, decisiveness, and ‘Rambo leadership’. The supervisor or the CXO is set up by the system and the membership to be autocratic and patriarchal. Heightened vigilance seems to be the norm exhibited by the employees in most collective forums for there exists no collaboration but only envy and rivalry.

Extremism gets reflected in the form of ‘goals’ that are deployed from the top and that generate oppression and victimization within. The minorities are the ‘incompetent’ and the ‘laggards’, the ‘softies’ and the ‘non-ambitious’, the ‘lazy’ and the ‘burn-outs’.

The original research on authoritarianism, and its measurement, was pioneered by Professor Stanley Feldman in the shape of 4 questions that appeared to ask about parenting and socialization but were designed to reveal how the respondent valued hierarchy, order and conformity over other values:

Feldman in 1992, convinced the US National Election Study – a body that surveys US voters to include the abovementioned 4 questions on parenting (authoritarianism). The NES data has been full of revelations that more or less explain why Trump is leading the Republican presidential candidates so far, and is even attracting democrat voters.

In the diverse set of narratives and coaching conversations that I have collected over 18 years of my consulting, I am sure that there would be an overwhelming uniformity and convergence on the following four questions were these were to be posed to the supervisor/ manager/ leader of the new recruit to be on-boarded, mirroring the Feldman’s structure: 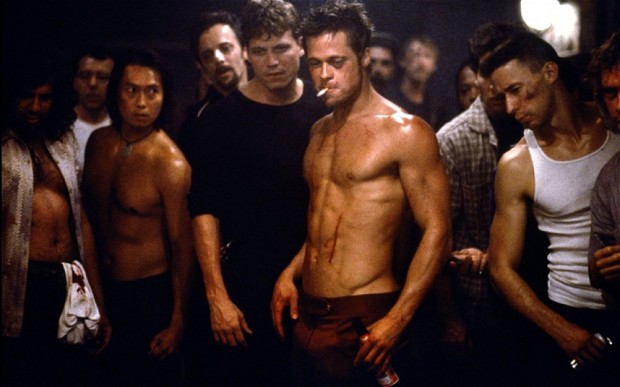 Ironically, I am often invited as a consultant and as a coach to help several clients who after years of this socialization, now have to become more masculine – more assertive, be more self reliant, more risk taking.

Even more ironical is when teams inherit a sensitive, feminine, gracious, inclusive and democratic leader who can really facilitate collective growth, the same teams term him or her as incompetent, indecisive, cowardly, and soft. It is almost as if there is a greater collective comfort in having a bully at the top – who takes quick decisions and punitive judgments. Life becomes a lot simpler and less chaotic.

Many successful organizations today have neither masculinity nor the femininity – only authoritarianism prevails. One does hope that this may change in the coming days or months or years …

My son often gets bullied in school.

He gets bullied because of several reasons – for he is a lot closer to the notion of herbivore man. He is kind and sensitive – he does not like competitiveness nor aggression. He comes home and has his moments though – of weeping and of rage, of loneliness and of vengefulness. But I don’t believe that he subscribes to the notion of achieving masculinity through aggressive games or other rituals.

As a parent I experience a rage but also helplessness. I have had a different experience of growing up and in much tougher times. It was difficult to be bullied after the initial painful years when I learnt to beat anybody in academics as well as in the boxing ring. I won my masculinity ‘medal’ through relentless challenges and ordeals.

But despite this past, as a parent, I find it difficult today to even provoke similar masculinity in my son. For example I advise him to stay away from spats, and not to get violent. I expect him to be civil and well behaved. I expect him to be sensitive and understanding of others all the time. I teach him that power and violence are not akin to being mature.

In all of this, my bias is clear – the civilized middle class man of the next generation has no legitimacy for demonstrating ‘masculine’ behaviors. It comes apparent that I value femininity more than masculinity. I know that many parents would join me in this conundrum –

The question that I am left with is that by not subscribing to the rawness of masculinity (and in being politically correct by owning the feminine), am I also setting my son up for authoritarianism as well? It is a question that I have no answers to as of now.

In my earlier blog on Mastani and Rau, I had promised to write about who Rau is and what he symbolizes.

To me Rau brings in masculinity in the form of courage, self-reliance, and aggression – and yet many viewers have dismissed this masculinity as hyperbolic and melodramatic. There is a certain disdain and discomfiture that some of my friends have expressed – viewing Rau as very earthy and primal.

Rau battles rampant authoritarianism in his people – people including his own community of Brahmins who are entrenched and caught with tradition, followership and hierarchy, denying their own desires and power – and being set up to be the punitive strong man who has to display enmity and paranoia towards all Muslims.